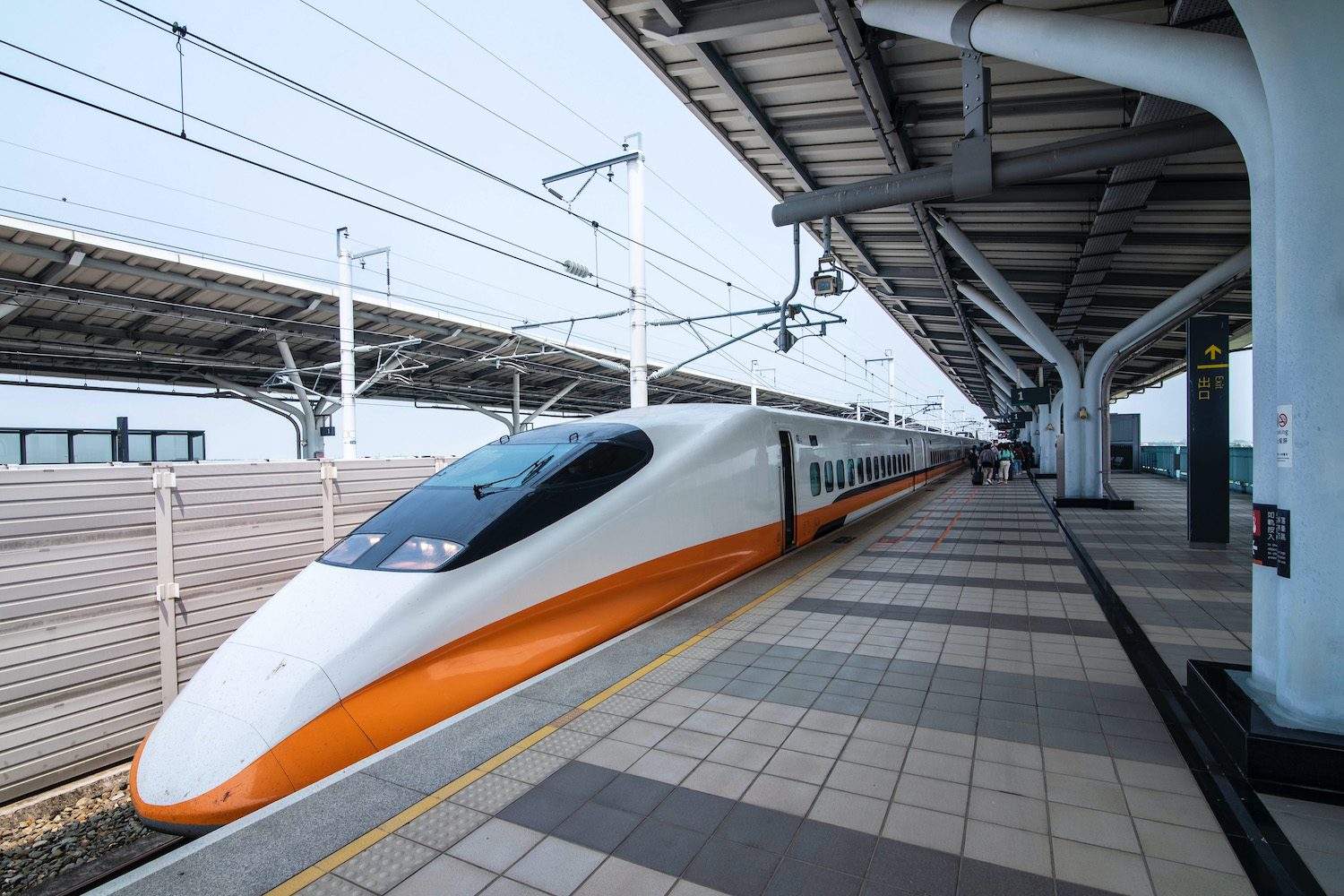 If you’ve never visited the country, you might assume that the topic of high speed rail in Taiwan is similar to bullet trains in Japan. Both the rolling stock (and indeed, the underlying technology) is basically the same; this isn’t an inherently wrong line of thinking.

On the other hand, there are key differences between high-speed trains in Taiwan and Japan, and certainly mainland China. Namely that, with few exceptions, they are far less useful for the average traveler.

This doesn’t mean you should write off this ultra-fast mode of transit, known colloquially as “HSR” among locals and expats in Taiwan. But it does mean you should continue reading to set the record straight.

Need help planning your trip to Taiwan? Commission a custom Taiwan itinerary!
Contents
1  Taiwan High Speed Rail Destinations
2  Important Things to Know About Taiwan HSR
2.1  Prices are high
2.2  Destinations are limited
2.3  Stations are inconvenient
2.4  Rail passes exist, but aren’t practical
2.5  Business class isn’t worth it
3  Who Should Use HSR in Taiwan?
4  Other Ways to Travel Long-Distance in Taiwan
5  The Bottom Line

You can’t ride high speed rail in Taiwan everywhere (more on that, and why it matters in a minute), but you can take a bullet train to (or, at least, near) many top Taiwan destinations:

The story doesn’t end here, however. Allow me to explain why for many travelers, Taiwan’s high-speed rail network is less than useful.

The cost of trains in Taiwan is generally low, with local services from Taipei to Keelung or Ruifang near Jiufen often coming in at under NT$100. Riding the HSR, on the other hand, costs several times that, with a ticket to Taichung more than NT$700 one-way; a round-trip between Taipei and Zuoying (near Kaohsiung) costs more than NT$3,000, even purchased in advance.

The high speed rail in Taiwan runs only down the west coast of the country, from Taipei (well, actually Nangang) to Zuoying Station in Kaohsiung. While trains serve many of Taiwan’s most important cities, including Taichung and Tainan, the entire east coast is left out, notably the (relatively) large cities of Hualien and Taitung.

One strange thing about high-speed Taiwan train stations? With a few exceptions, they are identical clones of one another—it’s trippy! Another unfortunate commonality they tend to have is being located far outside their respective city centers. While most stations offer free shuttle buses into the main business districts, it does somewhat counteract the convenience of high-speed train travel.

Another potential disadvantage of taking high speed rail in Taiwan? While you can theoretically get a Taiwan rail pass, it’s not as practical as the Japan Rail Pass and doesn’t save you as much money in the end. While in Japan you simply wave your pass to gain access, and can use it to travel to more than 100 stations around the country, Taiwan’s has limited utility.

Business class isn’t worth it

Who Should Use HSR in Taiwan?

As you’ve gathered reading through the rest of this article, fast trains in Taiwan are cool, but they aren’t necessarily useful for everyone. The vast majority of passengers onboard any given high-speed train are local Taiwanese, often commuting between Taipei and whichever city they originally came from before they moved to the capital.

Wit this being said, high speed rail in Taiwan does still have some value to foreign travelers, particularly those on short trips to Taiwan. Namely, if you’re based in Taipei but want to take a day trip to another city like Taichung, Tainan or Kaohsiung, or if your trip simply focuses on the west coast of Taiwan (where the HSR line runs) instead of the east coast and its much slower trains.

Other Ways to Travel Long-Distance in Taiwan

High-speed trains are the fastest was to explore Taiwan, but they’re not the only way to travel great distances. Buses in Taiwan are the most common way to travel from major cities to outlying destinations, while a variety of limited express and local trains snake down Taiwan’s east coast, all the way from Taipei to Taitung.

One way to explore on your own time (assuming you have an international driving permit) is renting a car in Taiwan. While this can be expensive compared to other places, with vehicles starting at around NT$2,500 per day, it also allows you to easily access destinations poorly served by public transportation, and not to have to plan day excursions according to schedules therein.

For many travelers, the usefulness of high speed rail in Taiwan is limited. However, even if you only end up needing to ride the Taiwan HSR between Taipei and Kaohsiung, it’s better to realize this now than after you buy your ticket. Additionally, you’ll want to have an idea of all the various transport options in Taiwan, so that you can make contingency plans in case a high-speed train trip doesn’t end up being the most prudent option for you. Need help planning your next trip to Taiwan? Commission a custom Taiwan itinerary—I’ll organize your transport, and everything else!