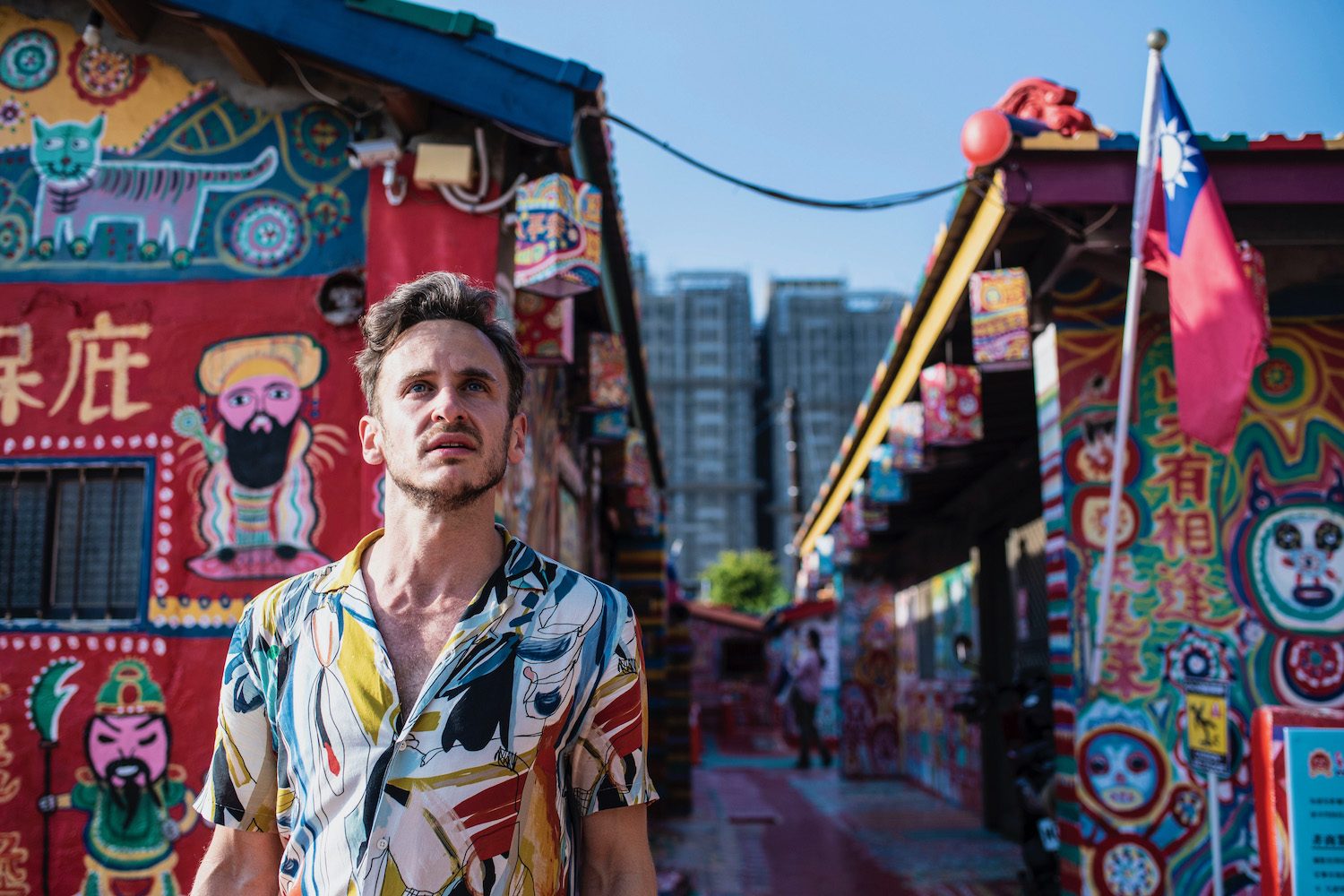 I’ll enumerate a more specific Taichung itinerary in just a second, but I’ll start with a more general observation: The energy of Taichung (which is pronounced Tai-zhong, and literally means “Taiwan Middle”) is so incredibly inviting.

I found this to be the case, first and foremost, when exploring Taichung attractions like Taichung Confucius Temple and the aptly-named Rainbow Village. It was also apparent, however, when digging into gastronomic delights such as lu rou fan (braised pork rice) and bubble milk tea, served in the shop where it’s said to have originated.

I hope you’ll continue reading, whether you’re in search of a comprehensive Taichung travel guide, or simply want inspiration as you put your own trip together.

Need help planning your trip to Taiwan? Commission a custom Taiwan itinerary!
Contents
1  Where to Stay in Taichung
2  My Favorite Things to Do in Taichung
2.1  Go Temple Hopping
2.2  Strike a Pose at the Rainbow Village
2.3  Eat Your Way Through Town
2.4  Discover Taichung’s Cultural Side
2.5  Take a Day Trip to Sun Moon Lake
3  Is Taichung Worth Visiting?
4  How Taichung Compares to Other Cities in Taiwan
5  Other FAQ About Visiting Taichung
5.1  What is special about Taichung?
5.2  Does Taichung have MRT?
5.3  Which district to stay in Taichung?
6  The Bottom Line

Where to Stay in Taichung

Although the city’s footprint is absolutely massive, most of my favorite things to do in Taichung are within biking distance of TRA Taichung Station (which, as is the case with many cities in Taiwan, is a way’s away from the city’s high-speed train distance). As a result, I’m going to recommend lodging that will allow you to sightseeing and eat within the smallest possible perimeter.

As is the case throughout Taiwan, most Taichung hotels aren’t anything special. There are certain exceptions, of course, such as The Cloud, where I stayed during my most recent trip. The Splendor is probably the city’s premier luxury property, while budget-minded travelers and those looking for a more local experience will want to search for Airbnb apartments near the station.

My Favorite Things to Do in Taichung 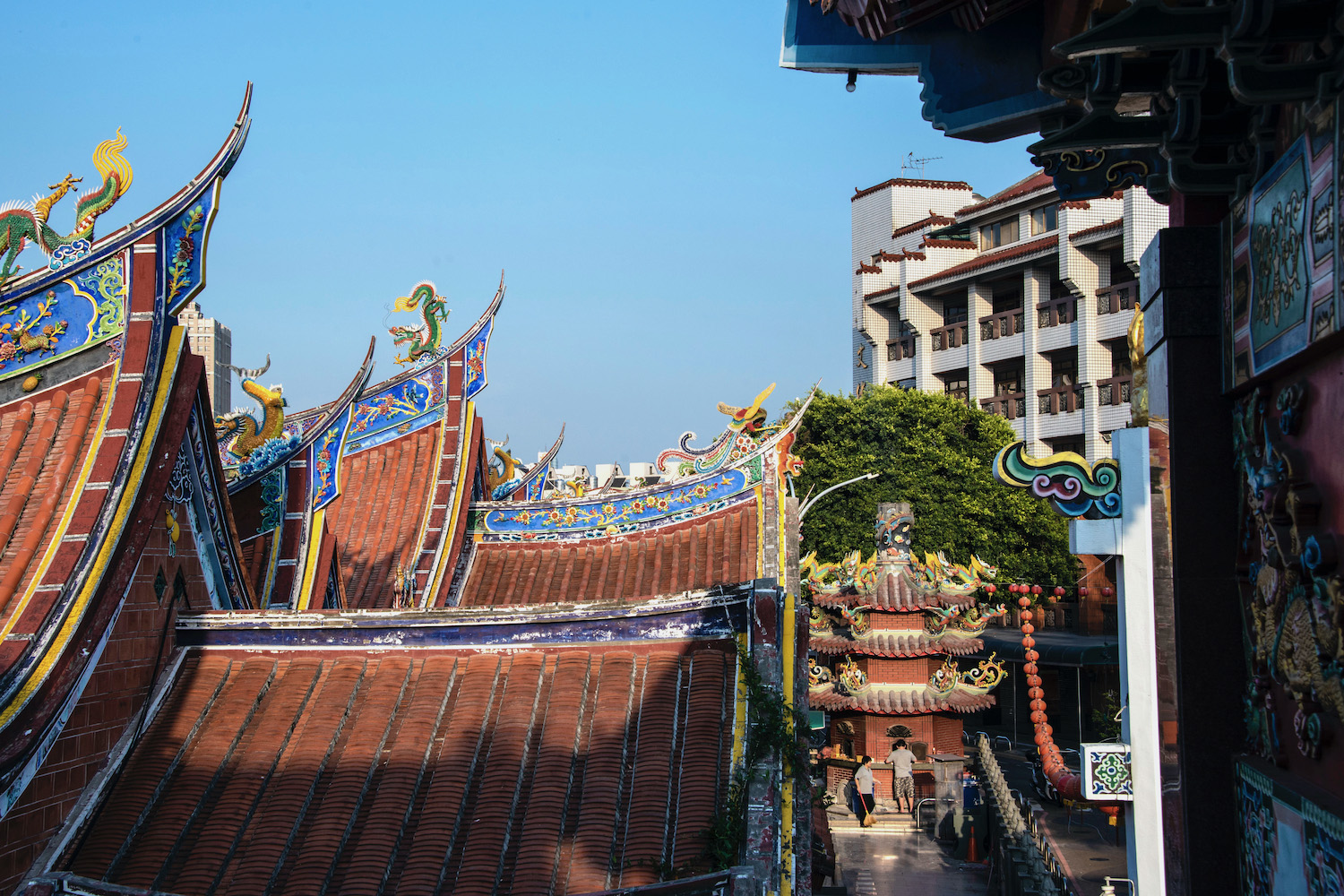 Apologies in advance: This post is going to jump around quite a bit, since the thematic trajectory of a Taichung trip doesn’t follow its geography. With this being said, I will list my favorite Taichung temples in order of how I recommend visiting them. The nearest two to the city center are Taichung Confucius Temple and Paochueh Temple—start your day with these two. You’ll visit Wenchang Temple a little later.

Strike a Pose at the Rainbow Village 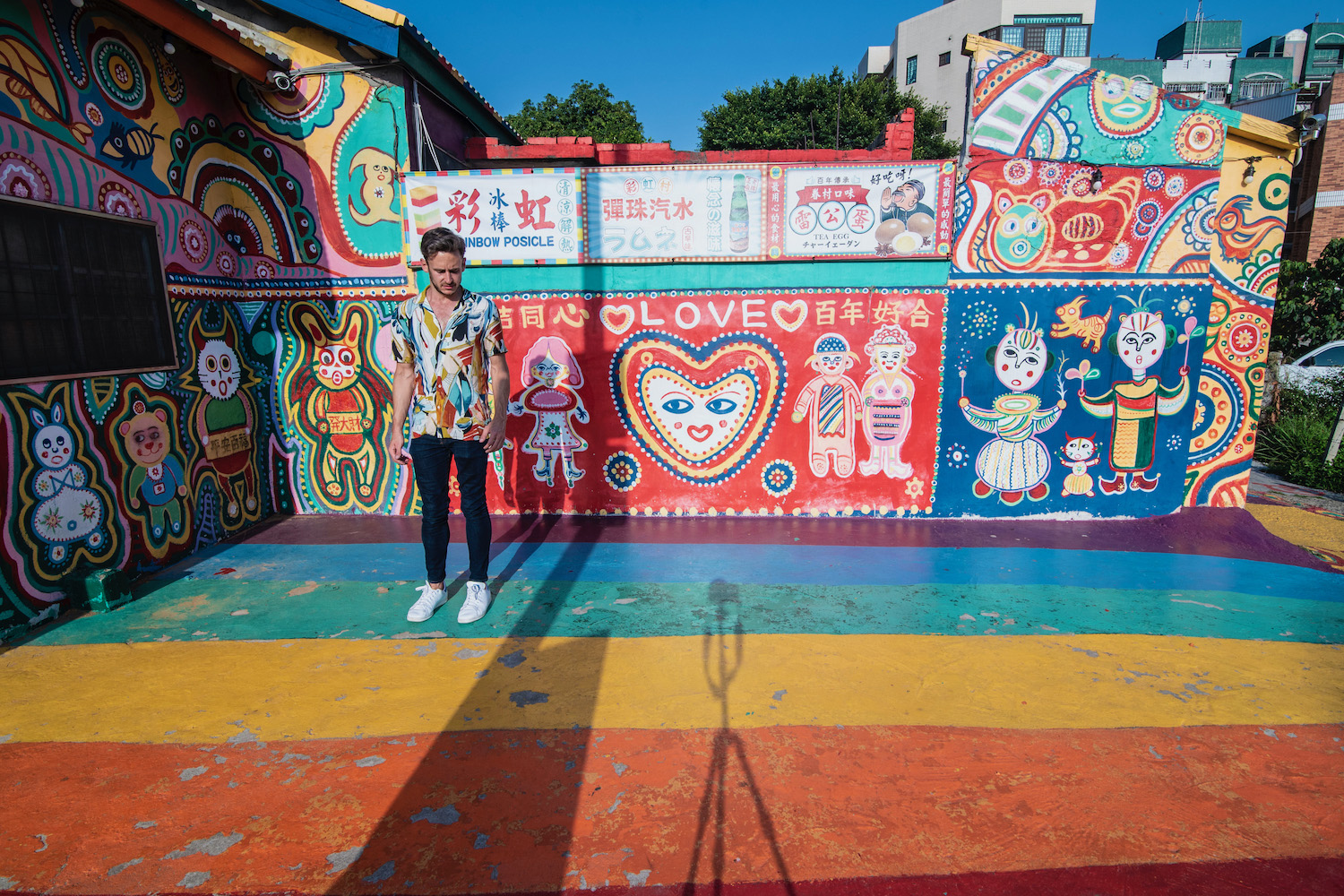 Specifically, after visiting Rainbow Village, which is one of the most popular things to do in Taichung, in spite of being little more than a selfie studio. Note that this place is also far afield: It’s about an hour by bike from Paochueh Temple. Note that if you don’t want to bike here (it can seem a long trek on a hot or very sunny day), you can always take an Uber herel

Eat Your Way Through Town 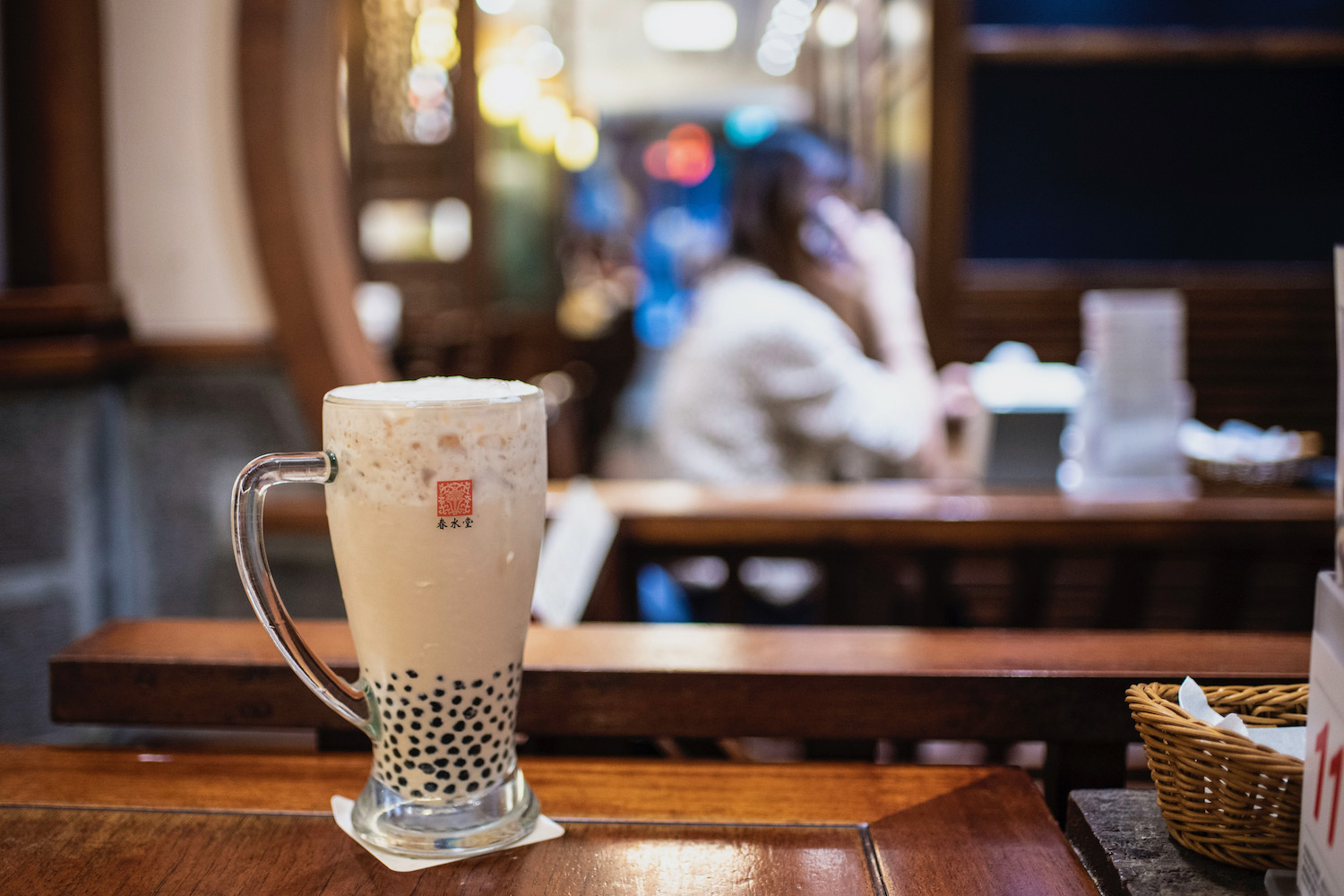 Whether you’re on the hunt for the original Taichung bubble tea or want a heart bowl of sum-sum for lunch, I’ve got you covered. My favorite Taiwanese food in Taichung can be found at Fu Ding Wan, which is probably Taichung’s most famous spot for lu rou fan, aka braised pork rice. Chun Shui Tang, meanwhile, is known as the birthplace of boba nai cha, more commonly known as bubble milk tea. 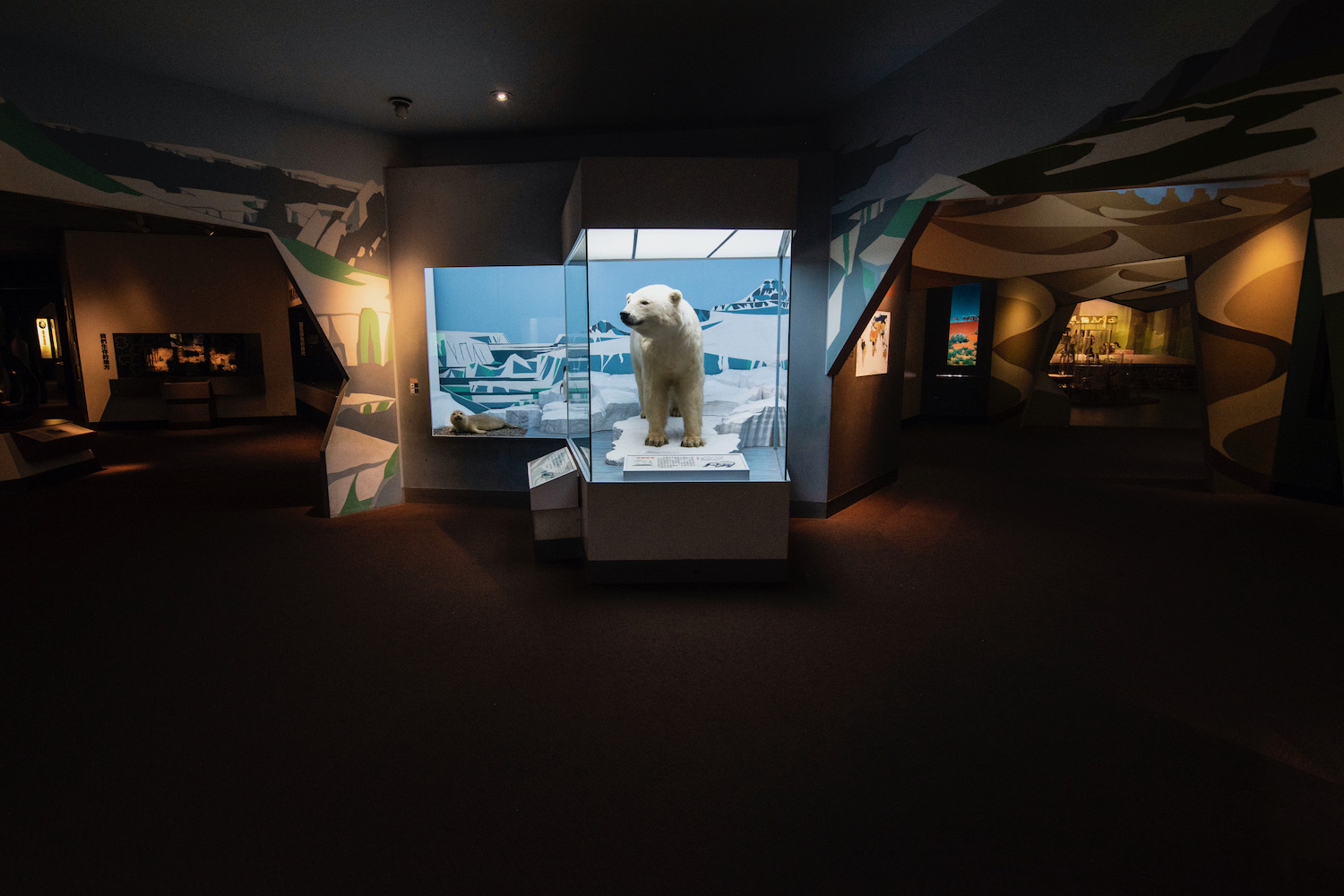 Museums are among my favorite things to do in Taichung—and not just because of the free air conditioning. Of course, I’d be lying if I said I fully disregarded this benefit. Logistically, I highly recommend breaking up the journey from Taichung’s temples to the Rainbow Village with stops at National Museum of Natural Science and National Taiwan Museum of Fine Arts, respectively. 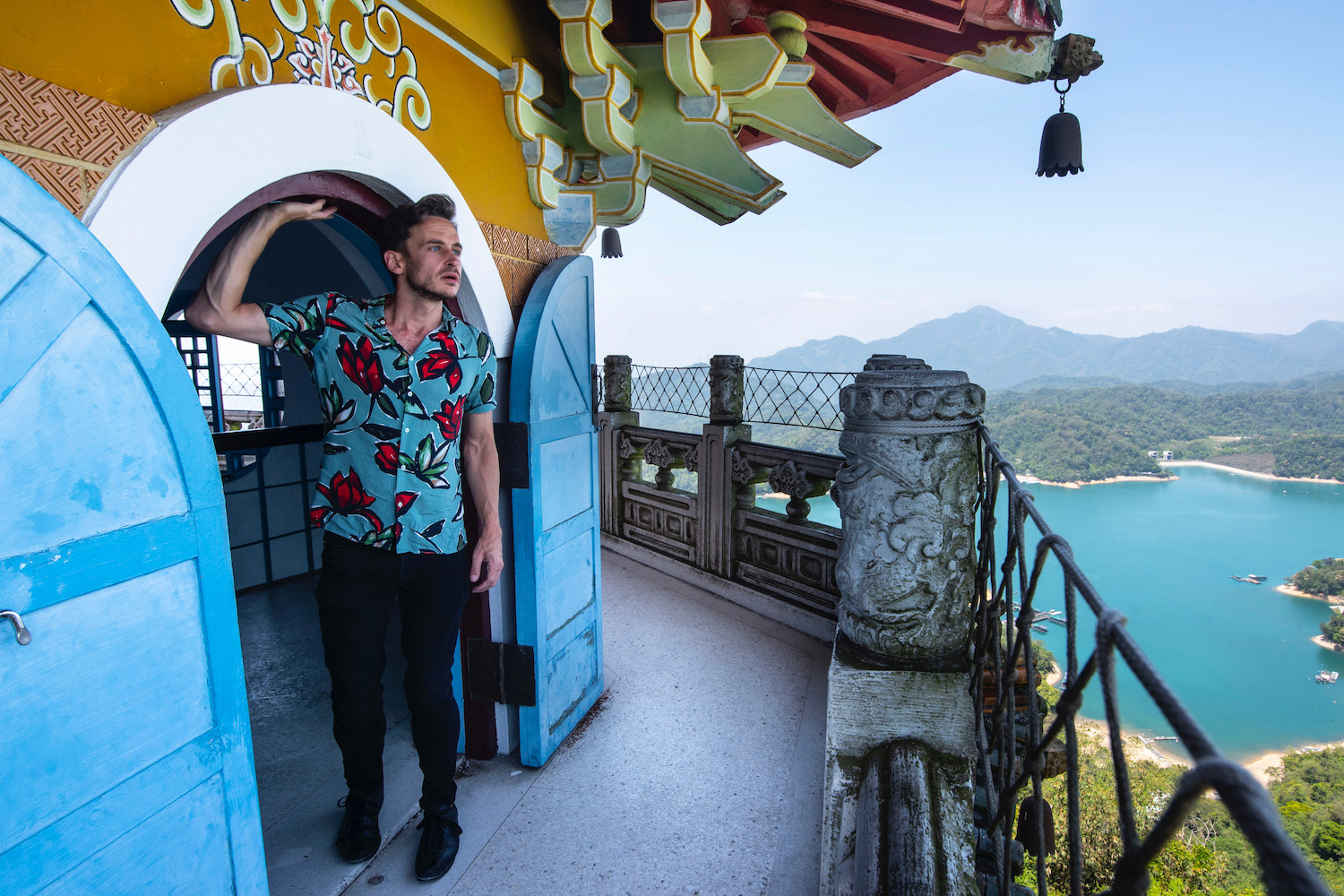 I’ll start with a disclaimer: You don’t have to do Taichung to Sun Moon Lake as a day trip. Whether or not you decide to stay there, however, I think you’ll find it a worthwhile excursion from the city. My personal favorite place at Sun Moon Lake is Ci-En Pagoda, where you can enjoy the best panorama of the lake, although some travelers prefer biking at water level.

Is Taichung Worth Visiting?

Taichung is worth visiting, yes, especially if you have few expectations going in—I imagine you don’t, apart from whatever curiosity led you to this page. Once you pass this proverbial checkpoint, the next question becomes how many days in Taichung you should spend. In general, I’d say two or three nights is plenty for most travelers, but it depends on what your goal in traveling here is.

Two or three days in Taichung is perfect for sightseeing. This assumes you’ll spend a day or two focusing on core things to do in Taichung, then visit Sun Moon Lake for a day. Generally speaking, I would only recommend longer Taichung trips for people who intend to rent an Airbnb, and to “live” in Taichung for a week or longer, seeking local experiences over tourist ones.

How Taichung Compares to Other Cities in Taiwan

Rather than do a detailed comparison of Taichung vs. Tainan (or Chiayi or Kaohsiung—take your pick), I’d rather discuss how it fits in the context of all of them. Which is to say the following: Taichung is something of a happy medium. It boasts fewer attractions than Kaohsiung and less history or culinary fame than Tainan, but is also less crowded than both. It’s less “authentic” than Chiayi, but also less stressful.

Ideally, of course, your Taiwan itinerary would include all the cities of the country’s highly-urbanized west coast. A perfect Taiwan trip, for that matter, would combine a road trip that runs down the east coast, starting in Taipei and ending in Kaohsiung, stopping in Tainan, Chiayi and Taichung (in that order) on the way back up to the capital, traveling via high-speed rail for efficiency.

Other FAQ About Visiting Taichung

What is special about Taichung?

Taichung is known for many reasons, but being “special” isn’t generally one of them. Rather, it’s a sprawling and largely residential/industrial city in central Taiwan, that just so happens to hide some treasures for travelers curious enough to find them.

Does Taichung have MRT?

Taichung does have a single MRT line as of 2023, although its limited scope at this stage also means it has limited utility. If you visit Taichung, it’s really best to use one of the city’s rental bikes to get around, or to use taxis and buses if the weather isn’t feasible for biking.

Which district to stay in Taichung?

Taichung’s central district is the most convenient place to stay, keeping in mind that Taichung isn’t especially convenient as a general rule, on account of its sprawl. Unless you know the city well, I’d advise sticking to hotels (rather than Airbnbs), as most Taichung hotels (certainly those that advertise their services in English) are in areas relatively friendly to tourists.

The good news? Taichung is diverse enough to keep you interested, but manageable in number—you’re never going to feel overwhelmed. The better news? Taichung is a welcoming, relaxing city, where you’re feel at home—and at ease—regardless of what you do. It disappoints me, to be sure, that more people don’t consider traveling here, even if that means fewer crowds and lower prices for those of us who do. Loved my Taichung travel guide? Commission a custom Taiwan itinerary!