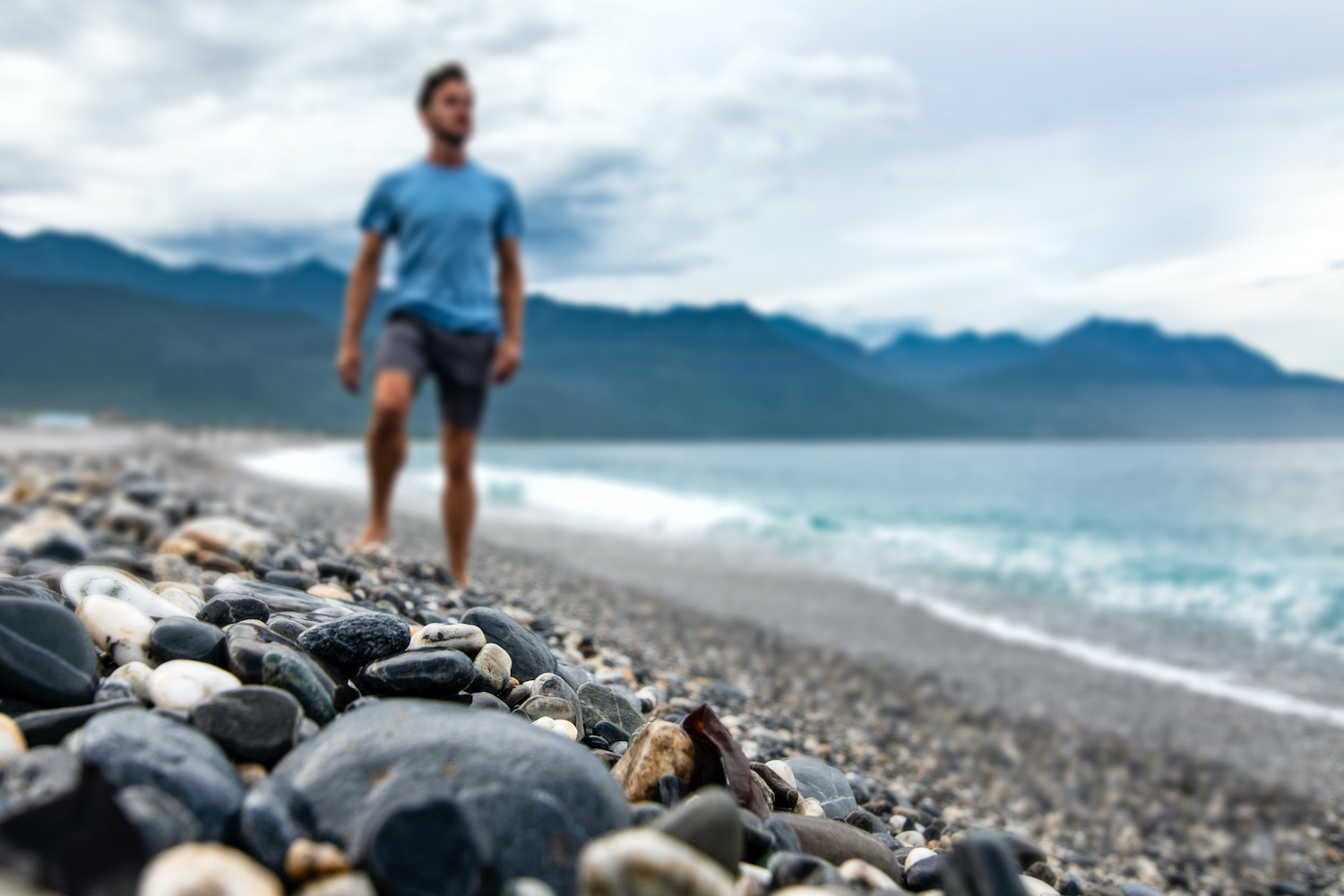 After completing the journey from Taipei to Hualien, I emerged from the station expecting nostalgia. But nothing was familiar, except the rain.

Can you imagine?I thought to myself as I walked toward my hotel along the sidewalk paved in marble from adjacent Taroko Gorge. The ‘you’ that was here 22 months ago would never have entertained the possibility of moving to Taiwan.

These two facts—the extent to which Hualien seemed alien, and my own alienation from the person I’d been the last time I was here—reinforced one another, of course, in spite of seeming contradictory.

A major different between July 2020 and October 2018 was that in 2020, I refuse to let rain get me down. With everything else going on in the world these days—literally every fact reported on the news has the capacity to ruin your day, if not your life—it would be ridiculous to do so. 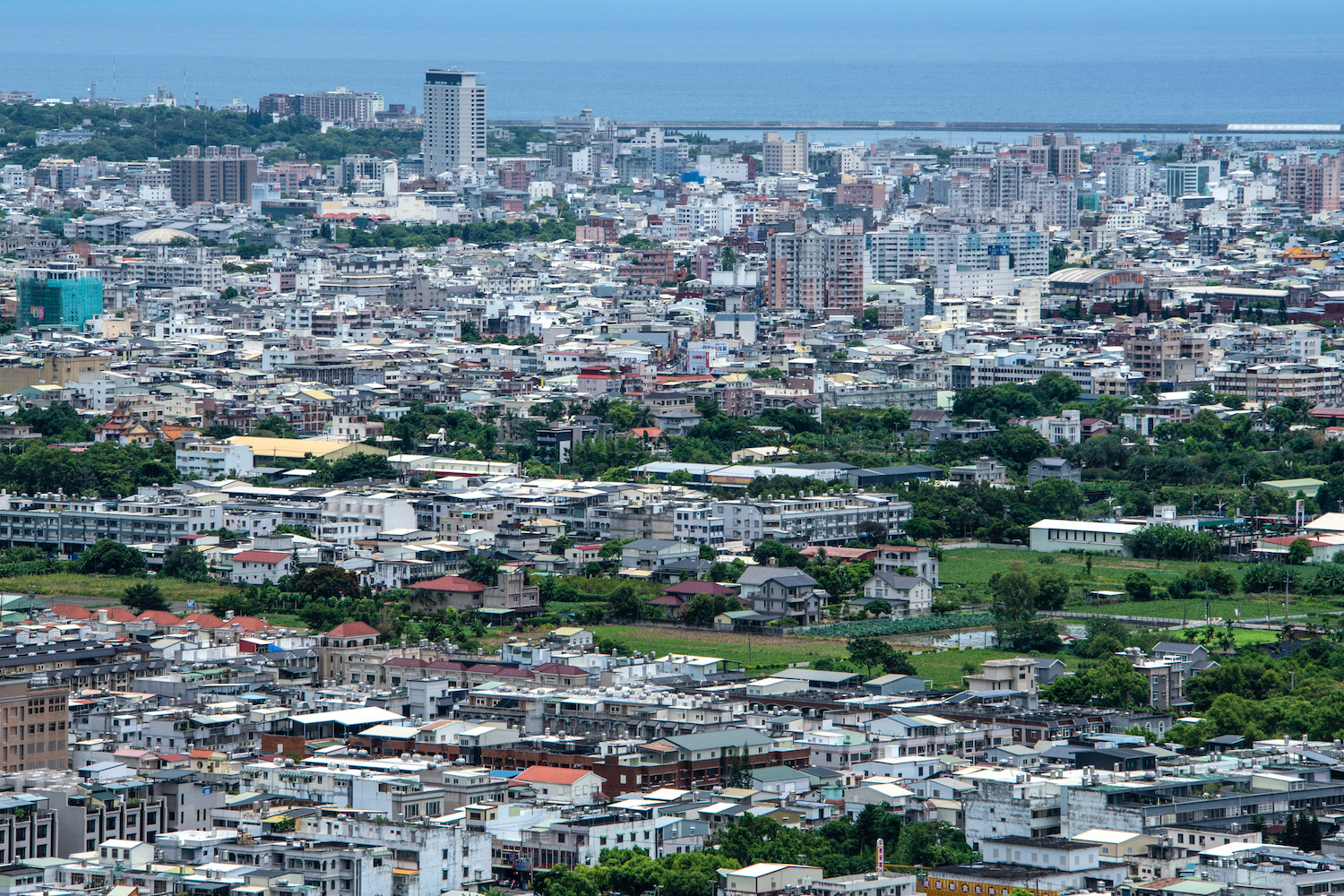 I walked back toward the station along the marble promenade, then picked up a Nissan hatchback from Avis and made my way toward Qixingtan, a beach I’d somehow missed last time. The water was as dreamy in color (and deadly in turbulence) as all Taiwan’s other east coast beaches, though the rocks it laps at aren’t actually onyx, as they seem from far away.

No, they’re a milky jade color, not unlike the tiles of Hualien’s sidewalks that alternate with its marble ones. This seemed a more significant revelation at the time—If I made the journey from Taipei to Hualien only to learn this, I laughed to myself, It will have been worth it—than it does now. 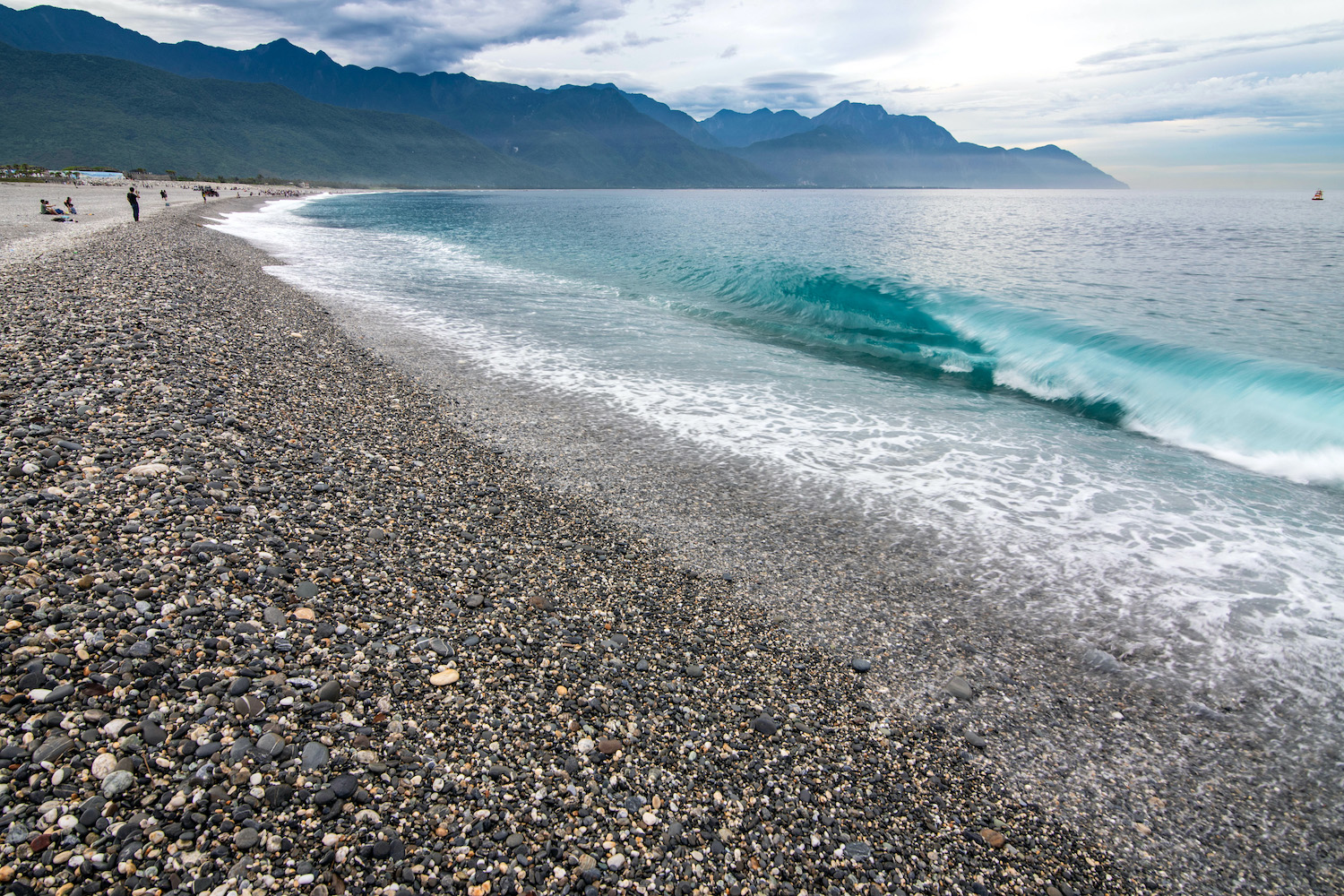 It was only when I was on my way back to the city center that the sun—a sun, I should note, that I had never previously seen while in Hualien—began peering through the thick blanket of clouds.

My belly still full from my surprisingly tasty Mexican dinner, I skipped my hotel’s breakfast my the next morning and departed for Taroko just after sunrise. Well, the time the sun would have risen, had it been visible: To my dismay, Friday was even cloudier than Thursday had been. 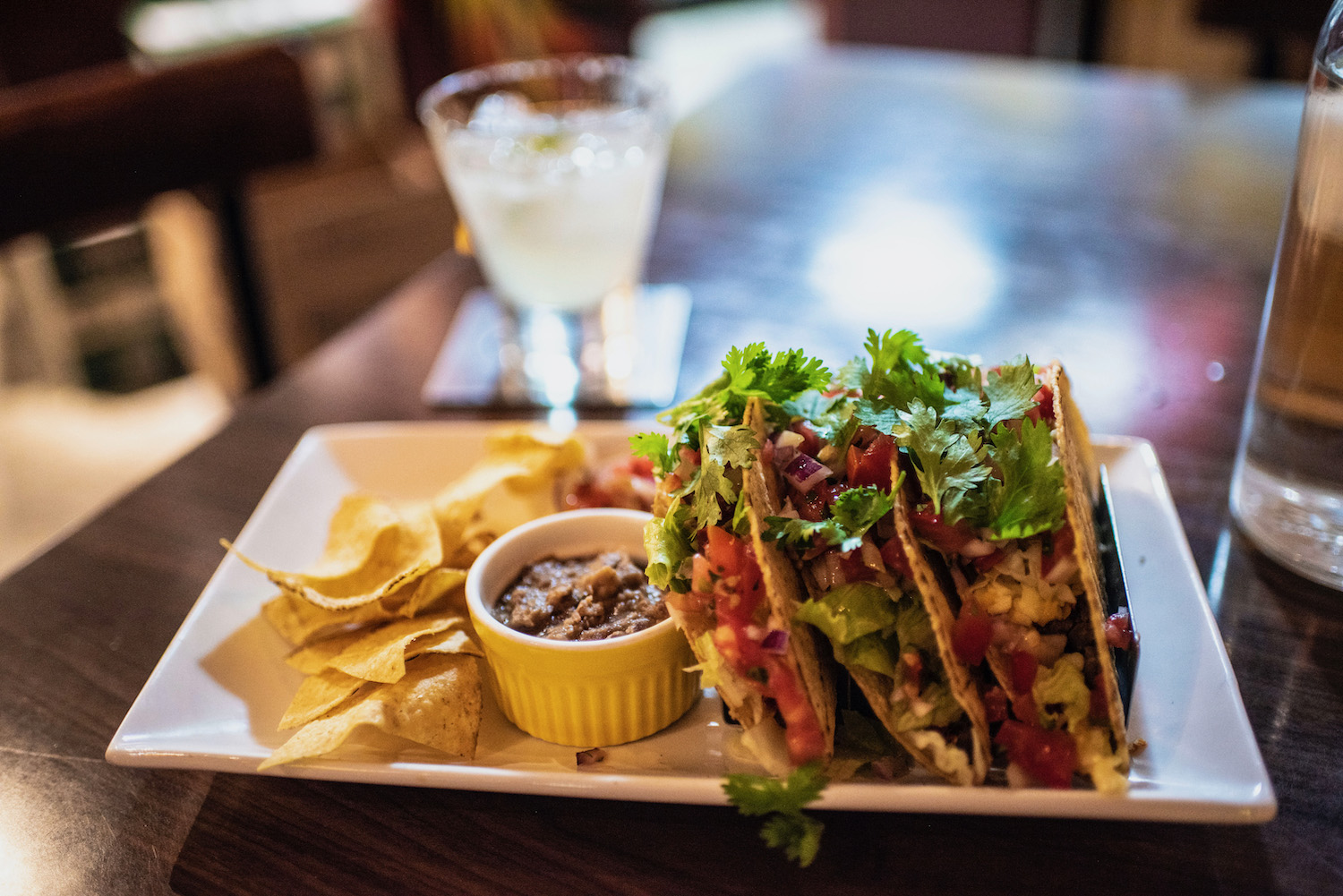 Not that it mattered as I made my way onto the Shakadang Trail. Matters of greater precedence concerned me, including one that made me question my decision to have traveled from Taipei to Hualien at all.

Be careful with poisonous snakes and bees, the English translation of the “Welcome” sign read. (In reality, the main danger I faced during the hike was local people on motorcycles, which admittedly mimicked the sound of swarming wasps.) 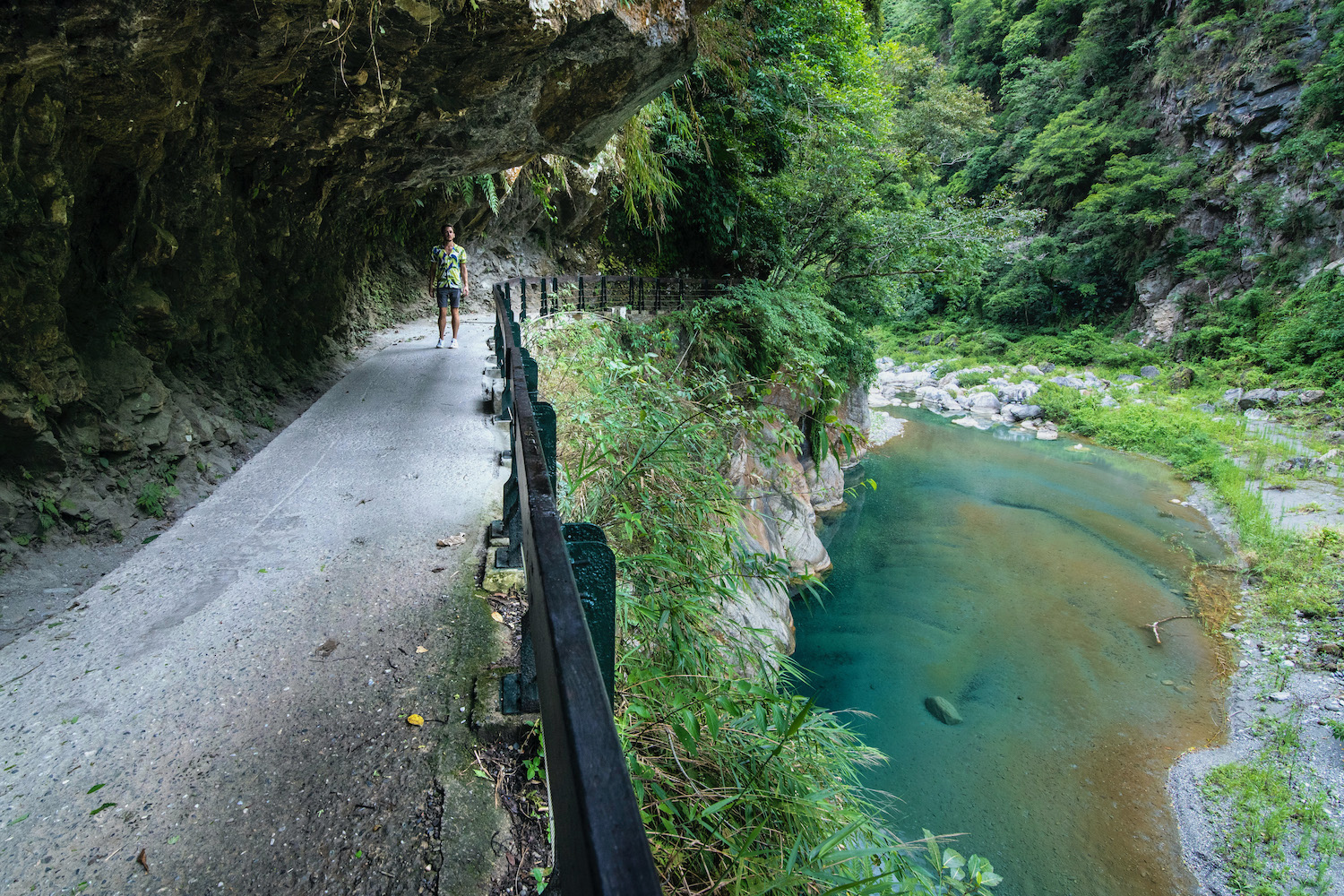 Yet apart from two elderly couples I passed near the start of the trailhead, I was the only visiting hiker. The fluorescent river water, the granite bed it swam in, the verdant vines that billowed over everything—they were all mine.

I did a bit more hiking in Taroko (namely the somewhat disappointing Baiyang Falls trail, which I’d missed in ‘18 on account of the rain), but I hadn’t simply traveled from Taipei to Hualien to re-visit the Gorge. I also wanted to return to the famous Qingshui Cliffs: On my previous visit, thanks to how terrible Google Maps is in eastern Taiwan, I’d actually photographed them from the wrong angle. 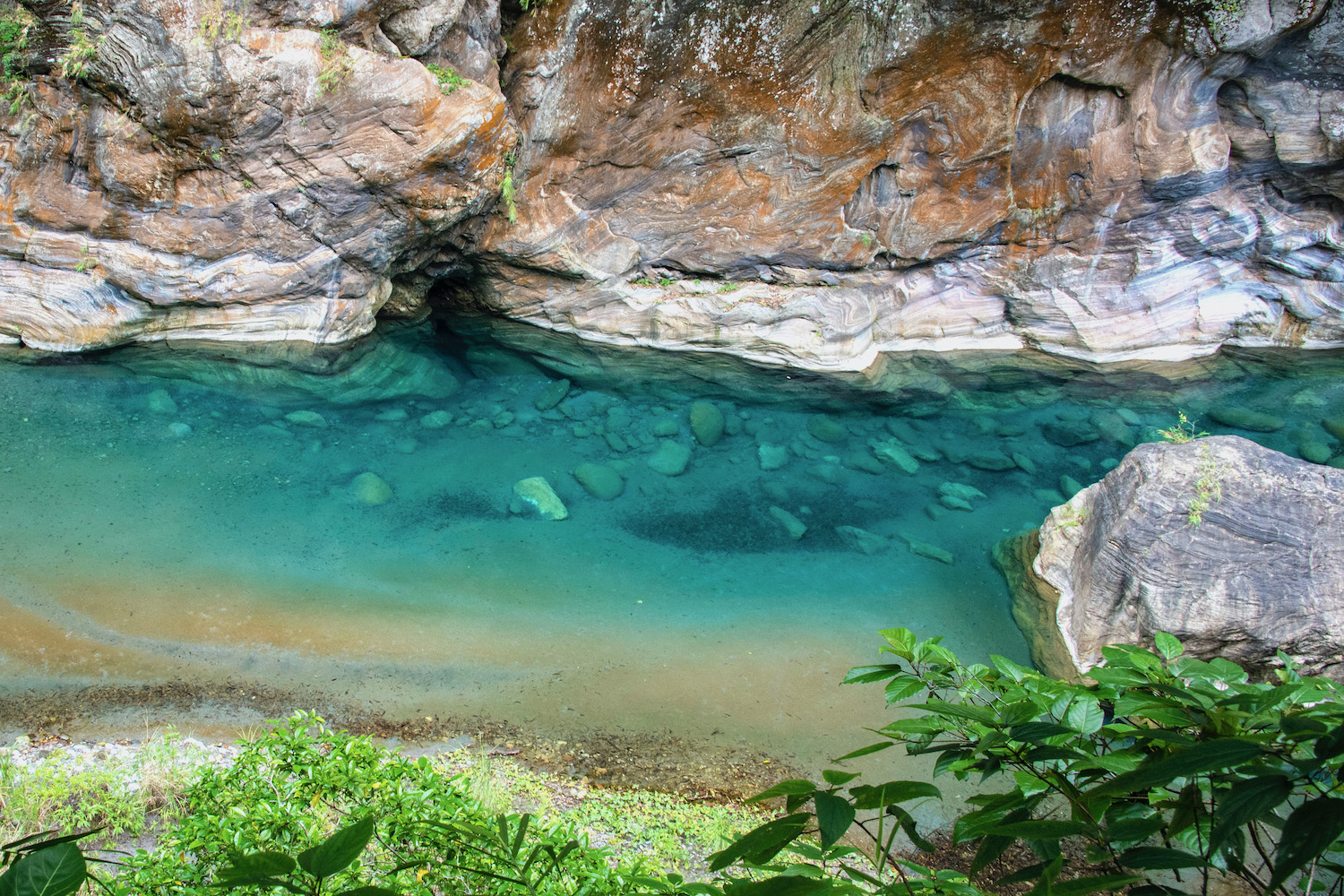 Unfortunately, since no one can travel internationally right now, the cliffs were swamped with Taiwanese who’d otherwise have been in Santorini or Hallstatt. I parked illegally in order to access the viewpoint; I returned to my car at the same time a tow truck was pulling up, though it wasn’t clear if he was there to remove me.

My planned swimming excursion to the Mugua River Gorge was even more disappointing, where a vigilant security guard made it impossible to park illegally, even if I’d wanted to. 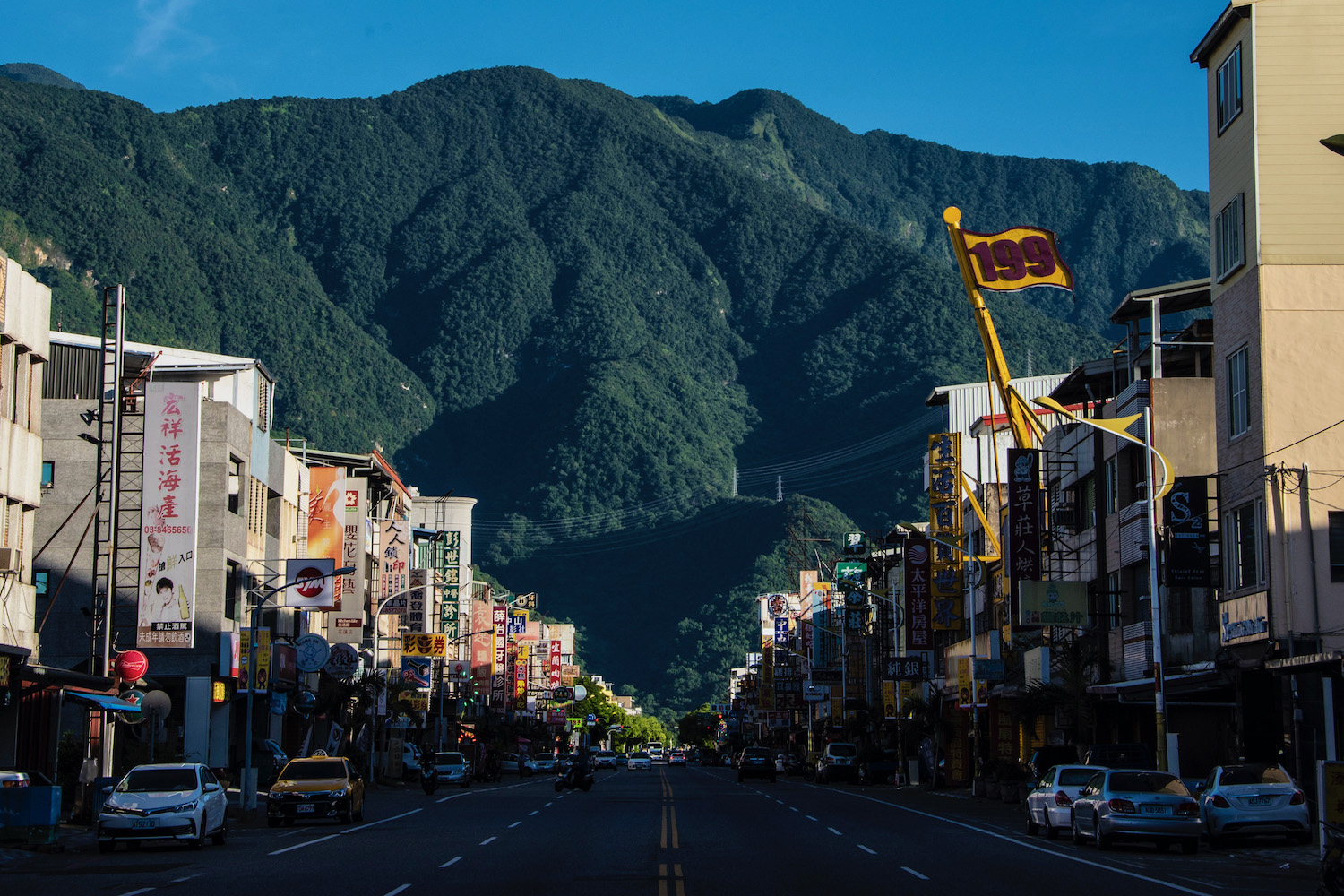 (I hadn’t, to be fair, once I saw how swamped with humanity its waters were. Certainly, the hour I spent driving there and back didn’t make me feel as if my journey from Taipei to Hualien had been a waste.)

Said journey had been as much an excursion as a reminder: Despair is temporary, and although it sometimes gives way to greater despair, it all eventually abates.

Walking back—for the last time—to my hotel after returning my rental car, I took a detour, passing under the train tracks through a tunnel made entirely of marble. As I entered one side, escaping the harsh sun shining down from the now-blue-and-cloudless sky, the slaps on my flip flops on the steps reverberated loudly from the exit, more than a hundred meters away.

They sounded like bullets (or maybe bombs); I’d have thought that’s what they were if I didn’t know better. But I do know better, even if I sometimes forget it.

Other FAQ About Visiting Hualien

How do I get from Taipei to Hualien?

The easiest way to travel from Taipei to Hualien is to take a direct, limited express train from Taipei Main Station to TRA Hualien Station. These leave several times per day and take around two hours each way, transporting you from city center to city center.

Where can I swim in Hualien?

Hualien is home to some of Taiwan’s most popular beaches, although most are not suitable for swimming. Swimming is actually forbidden at Qixingtan Beach near the city center; you need to bike about 30 minutes southward to Jici Beach if you actually want to go swimming.

Hualien is a very worthwhile city for travelers, even if you simply use it as a base for visiting nearby Taroko National Park. Of course, I do hope you will spend some time traipsing along the sidewalks of Hualien City, which are literally paved with Taroko marble.