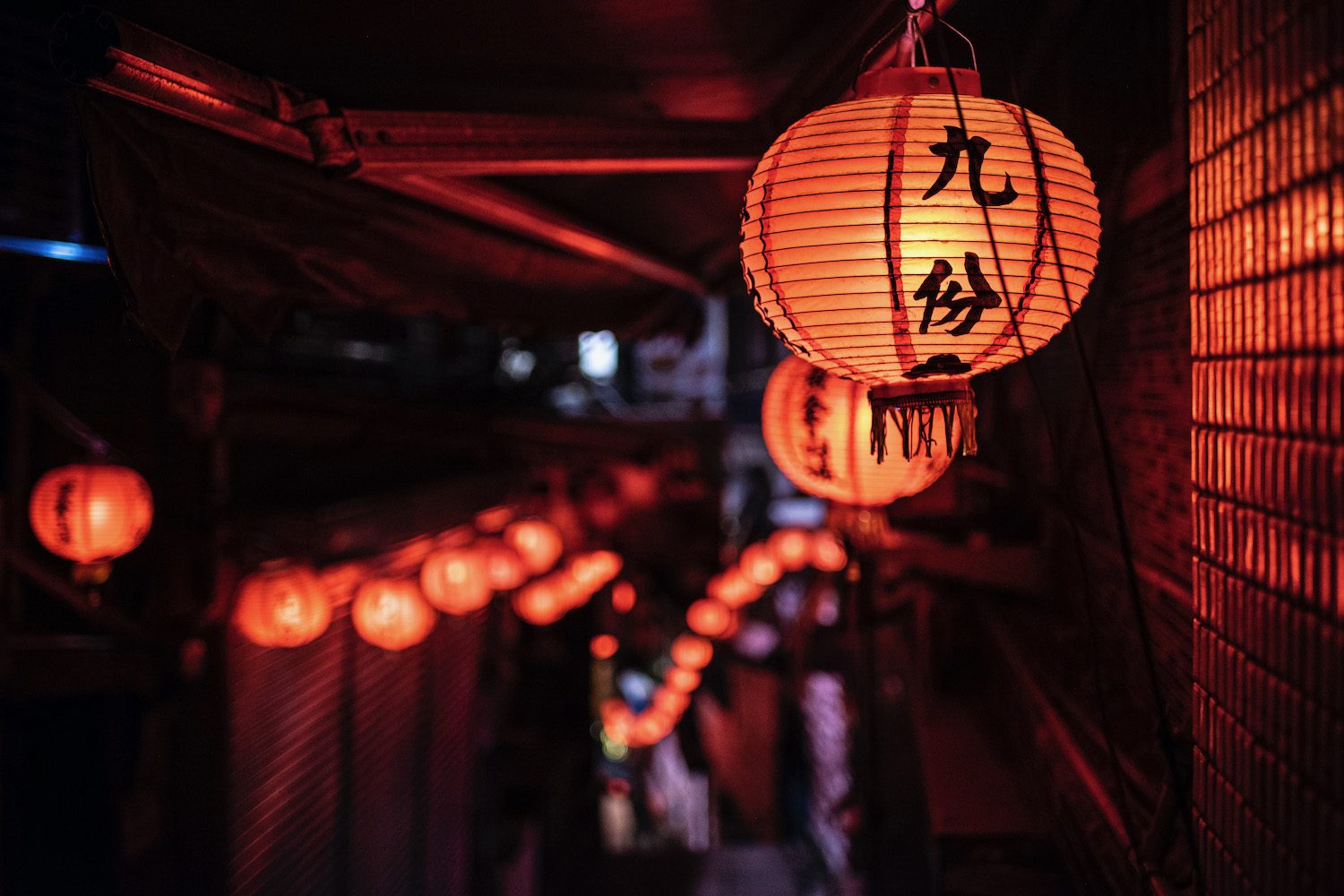 Every time I make the journey from Taipei to Jiufen, it takes me back to my first time along Taiwan’s most famous pedestrian thoroughfare.

It was mid-October of 2018, and it was so hideously rainy it had literally been impossible for me to visit the Queen’s Head rock formation near Keelung, which was to have been my first stop on a multi-day road trip. Between the parking lot and the entrance to the Jiufen Old Street, I’d had to purchase not one, but two umbrellas after the first (the second I’d bought that day) snapped in the wind.

It was one of the most hideous days in my entire travel history, even if you discount the fact that I damaged my rental car on the way up hill from Ruifang. Jiufen, at least in my memory, is not a happy place.

I hoped, as I walked onto the lantern-lined cobbles last Friday afternoon, that the third time (I’d returned again a few weeks ago and not particularly enjoyed myself) would be the charm. Initially, this didn’t seem like it would pan out: The guesthouse I booked had published the wrong address on their website; the owner (with whom I was communicating via LINE) seemed to find my difficulty in locating her home amusing. 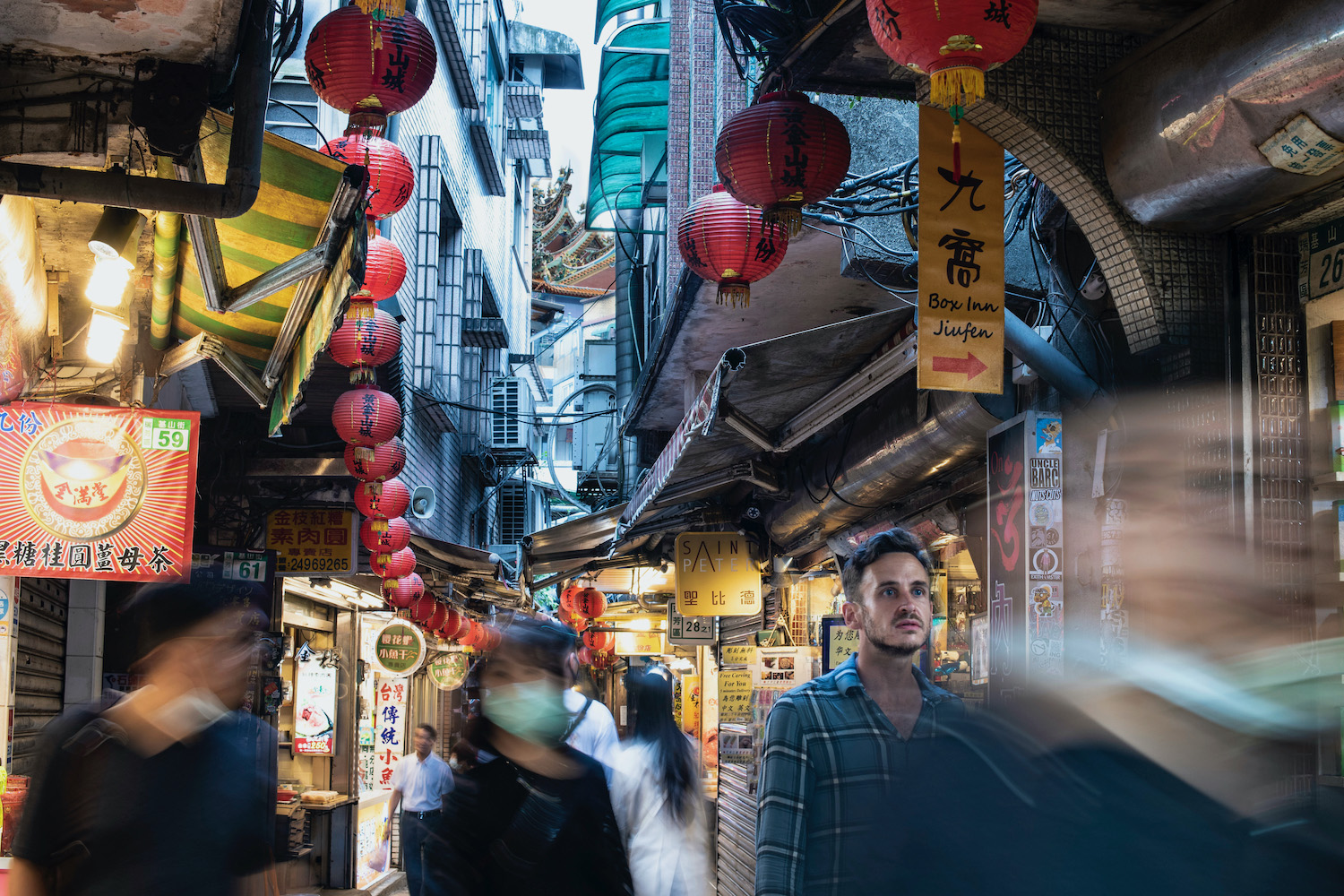 Thankfully, I stumbled upon a stylish (and, it seemed, vacant) hotel upon giving up on my initial accommodation choice. Preferring to wait for better lighting to photograph the Old Street (I’d previously avoided it entirely—due to the torrential rain the first time, and a general lack of inspiration the second), I made my way toward the more famous of two gold museums.

This one (officially the New Taipei City Gold Museum) is actually accessible directly via the highway bus I always take from Taipei to Jiufen, although I rode a local service in on this occasion. The facility has earned high marks (at least online) for its open-air design and how informative its exhibition are. 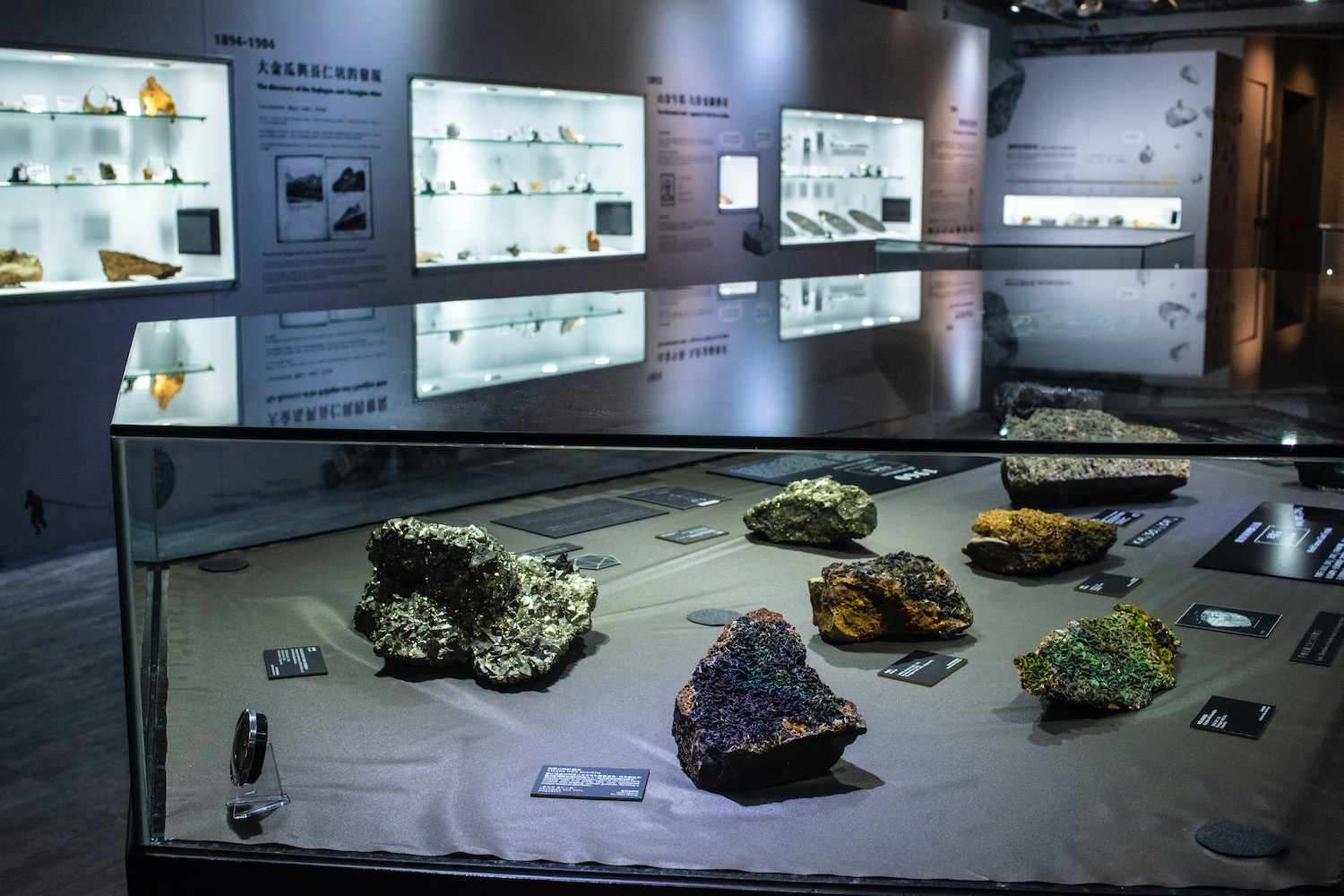 (Today, I had a difficult time focusing on anything but how sweaty my face was. Masks are currently mandatory here, in spite of the open-air design for which the museum has earned high marks.)

California or the Yukon

I did have a few moments of revelation, however, the first of which was a jarring fact: Taiwan’s Gold Rush, it seems, only ended sometime in the 90s—the 1990s and not the 1890s, as might have been the case in California or the Yukon. 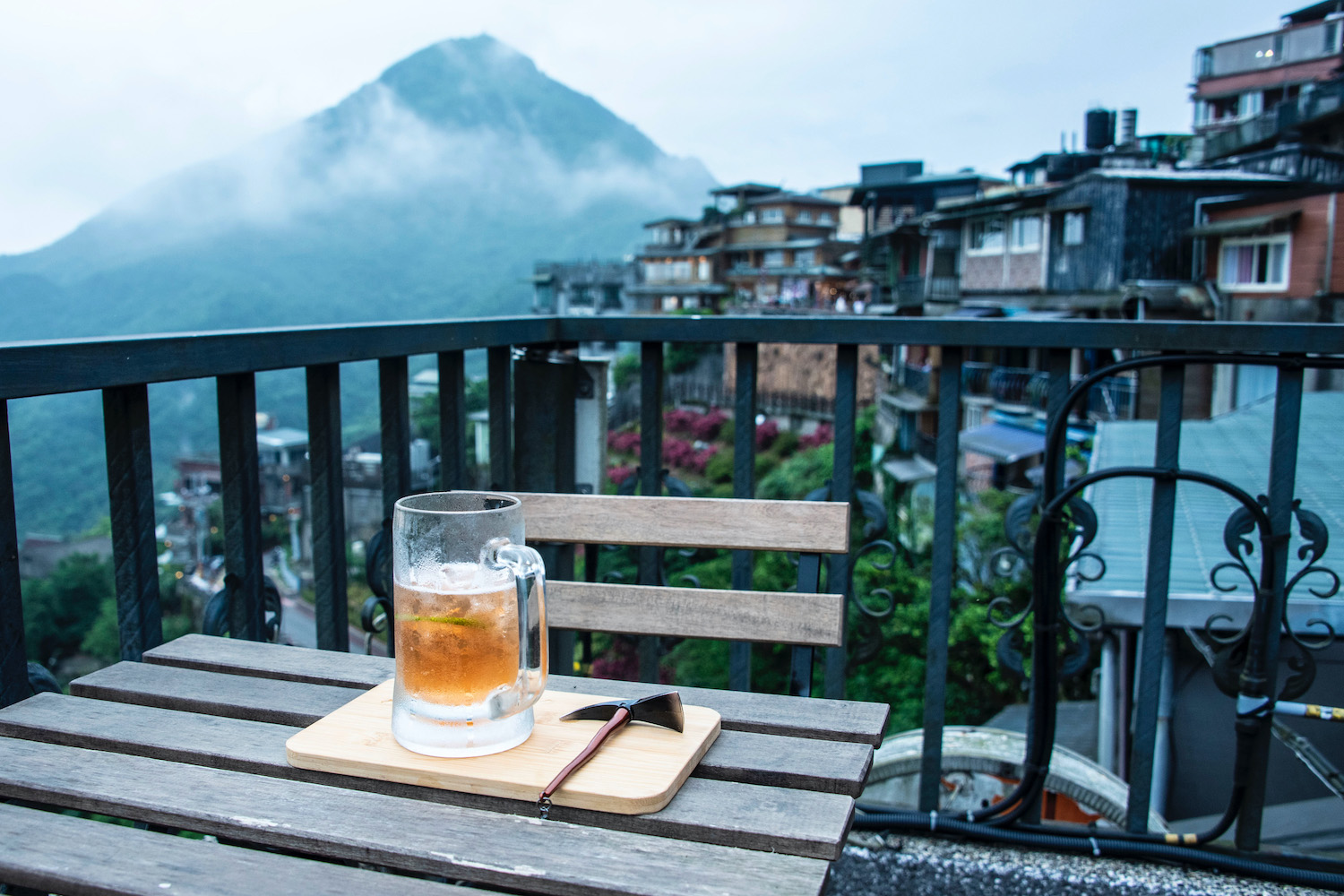 For reasons I can’t explain, I’ve never thought even for a second of this—the reason the town is famous—en route from Taipei to Jiufen, I guess due to my stress and anger (the first time) and the apathy that defined the second.

It was not all the fine specimens of gold within the museum, to be sure, that caught my attention upon arriving in the most impressive of the indoor exhibition halls. No, it was a small boulder cut neatly in half, to reveal a sumptuous interior of pyrite.

You always were one to get distracted by fool’s gold, I chided myself, thinking back to one recent relationship in particular, as I marveled at the tacky lamé of the not-such-a-gem stone glistening under the fluorescence.

The Mountain Is Mine

As night began to fall on the Old Street, I held my breath and waited for charm to come over my third soujourn from Taipei to Jiufen. This largely bore itself out, both before the countless vermillion lanterns of the city lit up, and after the last of Jiufen’s humble shops vanished behind their metal shutters.

I breathed a sigh of relief just before night fell, seated atop a teahouse I’d always wanted to try, sipping a too-sweet cocktail garnished with a miner’s pick as Mt. Keelung emerged from behind the mist over Jiufen’s skyline. Checked off my bucket list,laughed and sipping down the last of it. Two damn years later.

I went to sleep without any additional fanfare and woke up just after the crack of dawn, intending to try for a third time scaling another mountain (a physical one) I’d previously summited twice with disappointing results. Named for its teapot shape, Cha Hu Shan offers some of the best views in Taiwan—at least if you reach its peak on a day with even a single ray of sunshine. 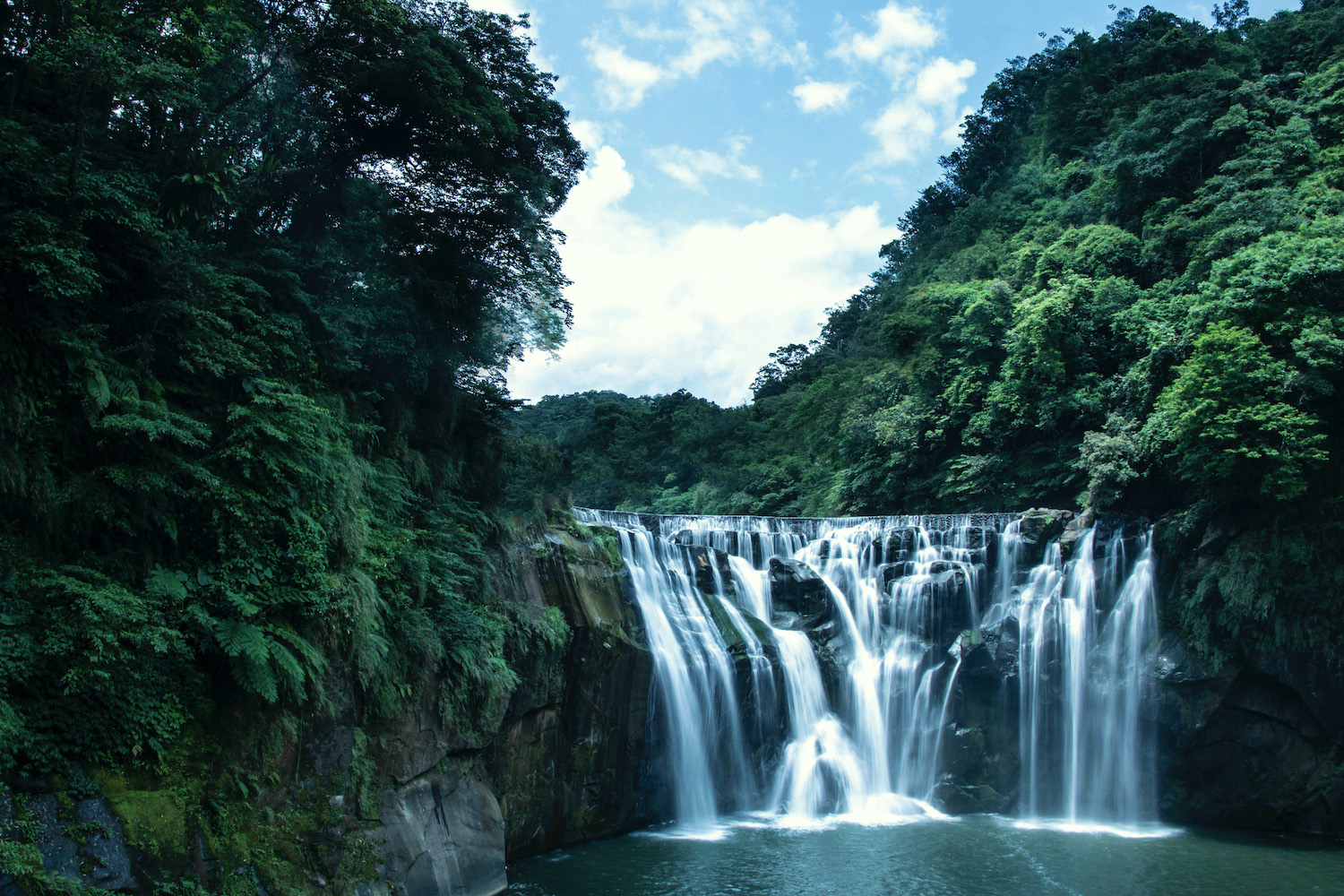 The entire sun happened to illuminate me the moment I reached the place where I wanted to craft my panorama, a development (it had seemed cloudy during my ascent) that was at once triumphant and anti-climactic. “The mountain is mine!” I shouted aloud, noting that in addition to the great serendipity that had shone upon me, I was literally the only one on the trail—I guessed because no Taipei to Jiufen day trippers had left the capital yet.

As I prepared to right the third of three wrongs (Shifen Waterfall, which like Jiufen Old Street and Tea Pot Mountain had been impossible to enjoy my first go around due to a persistent monsoon), I thought again about how recently Taiwan’s Gold Rush had ended, and my own refusal to stop chasing treasure. While many of my colleagues are throwing up their hands and moving industries as travel continues to languish, I’ve decided to stay the course.

For the first few weeks of the coronavirus this seemed futile, not unlike ascending Tea Pot Mountain on a cloudy day in hopes of sun might’ve looked, had anyone been around to watch me doing it. But just as my perseverance ended up paying dividends—precisely the ones I wanted—at precisely the moment I least expected it, I have a good feeling the storm clouds currently threatening me will abate sooner than I expect.

They will if the scene at Shifen was any indication: The sun was so bright it practically boiled the humid air. The third of three goals I had on my Taipei to Jiufen trip completed, I did an about-face, and began my journey back to the city with fresh hope.